Why it's obvious what we have here before us is...

In the previous post I discussed a little about paleo-art and the guesswork that is involved. Some of it is educated guess work (such as ligament scarring on bones helping to show muscle attachment)...but some of it is just plain old make believe (such as when a single toe bone is found, a complete skeleton is reconstructed, and an art piece created showing what the creature was...and very often the fact it is based on a single small piece is a hidden from the audience). 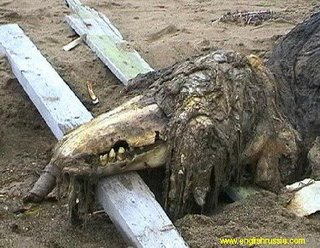 About a month or so ago while going over a cryptozoology website (www.cryptomundo.com if you want to check it out) there was listed a report that a Russian fishing vessel had found an unknown bit of skeleton that perhaps belonged to some sort of sea monster. Later several people came online to help identify the skull...but it was funny to see all of the people guessing as to what the creature might be...showing how our imagination can sometimes can get the best of us (which isn't always a bad thing). 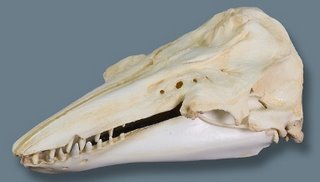 I read the general story to my class and then showed them a brief glimpse of the rotting corpse. I then gave each student a copy of a clean skull and asked them to 1) Render the skull by using basic drawing techniques 2)Flesh out the skull to depict what the head of the creature might look like 3)Draw a smaller version of their head with a body of what they thought the entire creature might look like. We mostly got dinosaur type pictures (which is what the Russians believed the creature to be.)

After they had completed the exercise I showed them what the creature actually was! It is hard to imagine that the real creature could 'come' from the skull presented...and if we didn't have a living example to directly compare the skull to I wonder what the scientists would would imagine it to be... 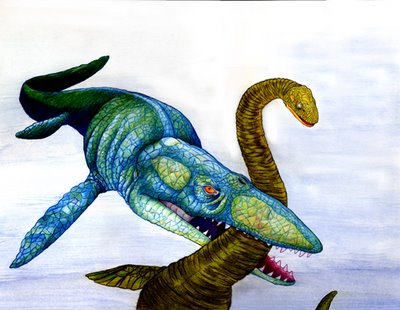 Since I was due for another drawing for my kids, and I was enjoying the computer free zone for a bit, I threw my hat in the ring on this project. I started with a quick gesture drawing of what I wanted to do, grabbed a big honkin' piece of illustration board, and went to work. I didn't like the plain white background this time so I used a splash of water color. I knew I would never be able to to use Prismacolor on such a large background ...too hard to try to match up the stroke work in sections and I would need about 75 pencils by the time the board 'chewed' them up...so it is a safe option for filling space quickly. I was also careful to keep the brush strokes 'visible' to add some visual interest.
Posted by Brine Blank at 9:58 PM

Very interesting assignment! I have to say that I love your hand drawn work. It's packed with details and color. Do you do scientific illustrations? If not, that may be an avenue to look into.