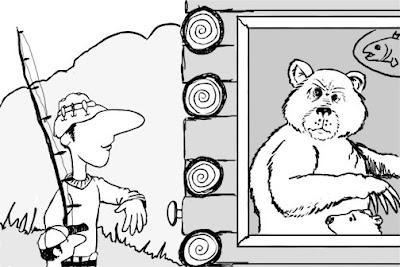 "You see son, by trusting my keen instinct I've always managed to avoid danger in the great outdoors..."

Moleman update...slowly but surely...at this point I've got all of the major items plugged in and just need to work on the background and accents...if someone would figure out a way to stop or slow time it would sure help... 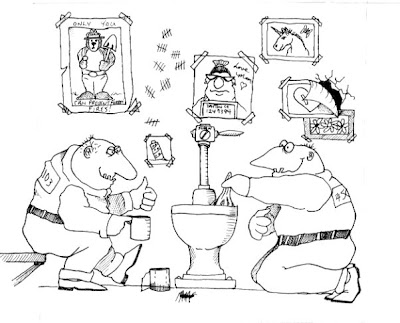 What prisoners do when the ingredients sealed in a plastic bag (and hidden in the toilet) ferment into alcohol...

I actually learned about this while visiting a prison (and by visit I don't mean I was actually in prison nor was it a 'scared straight' program for artists heading down the path of a life of crime). After several of the inmates were found to be drunk (one of which broke three pairs of handcuffs...gee let's give inmates access to weights)they did cell checks...and found about 10 gallons of booze hidden in various areas, including the toilets so it would be chilled...they would shove apples, kool-aid, bread, and sugar in a bag of water (sometimes juice) and let it ferment...

And the moleman continues! 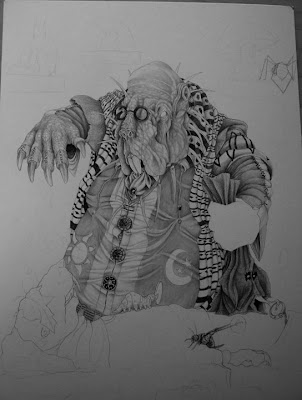 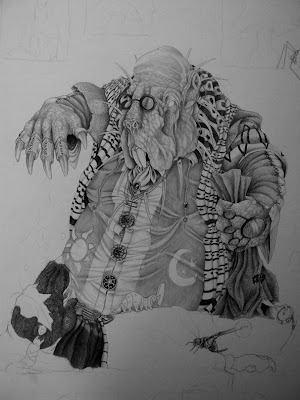 IF: Hard (Time) for Seahorses 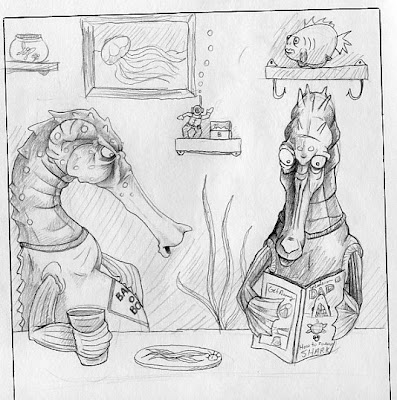 "These women don't have a clue...I'd like to see them be able to get pregnant and have to feel what it's like to carry all of this weight around in THEIR belly..."

On a side note...several months(?) ago on Drawn.ca (a great site if you've never visited)gave a shout to a project that is going on called 700 Mole-Men...on this site is a listing of names and brief descriptions of characters and it seemed like such an awesome idea that I decided to throw my hat in the ring as it were...most people have tended to do fairly quick drawings but there are a lot of great images...I'm too stupid to do small so I'm working on a 15x20 piece of illustration board...plus I haven't done anything serious with graphite since my wiener dog pic...Check out the site and give it a shot!!! The list alone is worth reading for grins.

I chose "Doc Minceworm...a fraud"...I figured he is a bit of a snake-oil salesman and envisioned him as someone that would literally rob his patients blind...so that is the direction I am going. I also am trying to incorporate all of the elements and principles of design into the drawing (except color of course) as a test run for a possible project idea. 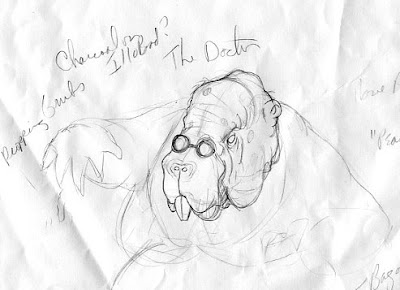 I did a quick character sketch and a couple of very loose pics for placement of items...Then roughed out the real pic on the illustration board and I've started doing all of the shading a bit at a time...I have all of Dr. Minceworm's helpers robbing the guy as he gets his 100% guaranteed healing therapy... 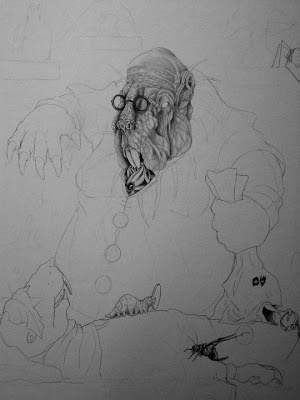 The only bad part is going to be once I've shaded it all I am going to have to go back and adjust all of the values to help make sure the form and texture really pop...I've been careful to have a sheet of paper under my hand to keep from smudging but as areas get completed it is fairly obvious that spots are too light to really work at this point. 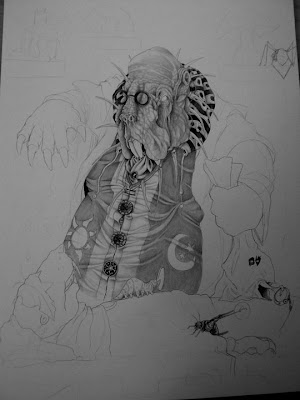