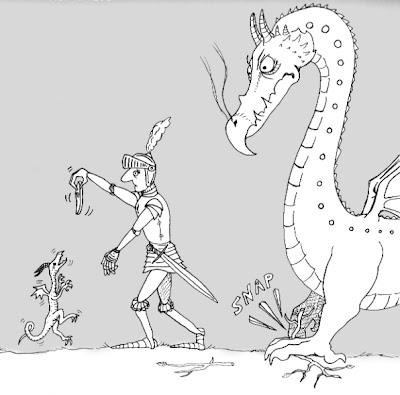 ON A RELATED NOTE: Congrats to Kiley ($36,000), Jessica ($28,000), and Jared ($23,250) for their scholarship offers! Also congrats to former student Tyler for getting 3 illustrations selected for a show at Columbus College of Art and Design as a Freshman.
Posted by Brine Blank at 4:58 PM 15 comments:

I always encourage students to step up and try something new...even if
it isn't something that we are focusing on in class (although I do try
to throw them acurve ball from time to time). Sometimes I am asked "How
do you do (fill in the blank)?" There isn't always a
straight-down-the-line answer to this question as there are often
multiple ways to do things. I think the real question that they want to
ask is "I've never done (fill in the blank) and I want it to come out
looking like it is going to hang in a museum on my first attempt...how
do I do it without a sense of failure and having that fear over my
shoulder the entire time?" The best way to do something you've never
done is...well to just do it. I realize (and try to give) basic
instruction for some 'new' things. ..But the reality is it is difficult
to explain how certain media will react under certain circumstances and
to get it to look nice...Explanation can never take the place of
experience...As artists we tend to be 'hands-on' and no amount of
explaining is going to give you the 'personal' touch of having done
something. You just have to push yourself out of your comfort zone and
see what happens. Sometimes it is going to be a major mess and
sometimes it is going to turn out okay. Either way you can always learn
and garner another 'tool for the trade'. I always enjoy and encourage
my students to give something a try in different media. The first pangs
of frustration are generally overcome with time and practice. 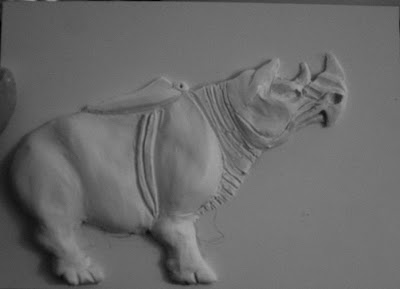 I had always wanted to do a 'relief' type illustration where the image protrudes from the picture plane as well as wanting to work on claybord. While going through an art history book I have I ran across a rhino vessel from the late Eastern Zhou Period. I figured since I was on a bit of a break I would give it a try and start to get a feel for both. I started by drawing out an outline of the rhino to use for a separate illustration. The claybord didn't hold the graphite like I thought it would so I figured I would use the outline as my template. I had purchased a small block of Super Sculpy for $1.77 and started to mold it to the panel.

Typically when you do a form on a panel you want to have anchors present to help hold the Sculpy in place. I had a horrible time in the beginning because I didn't do
this (I lacked a drill and was afraid if I just screwed in screws it
would crack the panel) and the head kept sliding around all over the
place. Once I started adding in the body it held in place a lot better.
I used some plastic clay tools to help etch in cuts and to curve the
form, but a lot of smoothing I just used my finger (Sculpy is also easy to smooth without worrying so much about gobbing up). 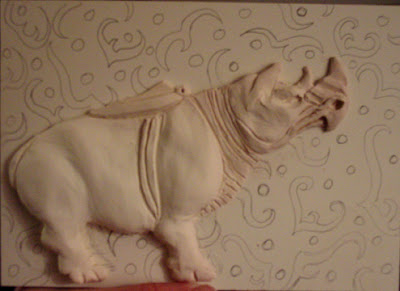 After I got the form down I fired it in my oven. Super Sculpy
has the advantage over traditional clay because it can be fired at a
lower temp in your oven, it doesn't shrink when fired, and it is much
less prone to holding air bubbles or cracking. After the baking I used
sand paper to clean up some of the lines and edges. I then found a
design from the same period and drew it in the background. I started to
ink it in and found I wasn't happy with the way it laid on top of the
panel. 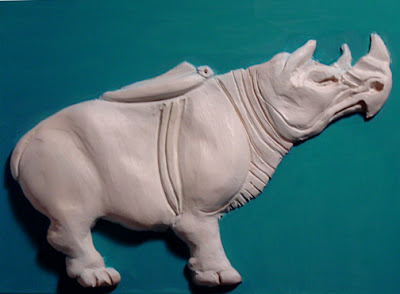 I finally decided to just use a flat color on the
back so painted it in with an acrylic ink. The real issue began when I
tried to paint the rhino. The original vessel was bronze,gilded with
gold and decorated with silver. I had some acrylic gold and silver ink
and thought it was going to be an easy job to finish up. And then chaos
had her reign. The Sculpy resisted the ink and the spray primer I had
wasn't a good match for the project...having previously used the primer
for another painting project I was afraid that I would go through all
of that work and then have to sand it down. The silver was left as a
watery grey schmoo so I tried to wipe it off with a rag and see how that
looked...bad. I ran the whole plate under water (which washed off all
of the ink...even the background) and spent the next bit drying and
repainting. Thanks to capillary action and not being able to get the
water molecules that remained in some of the cracks, the ink kept
'bleeding up' on to the piece. So a 5 minute job turned into a two-hour
battle of washing, sanding, drying and repainting. My final step will
be to add some design work and finish cleaning up the panel...although
I do like the contrast of the flat panel with the white form.

The important thing is that I tried something I had never done
before...wanted to scrap it 50 times while doing it...but completed it
enough that I LEARNED some things (good and bad) that can be used later
on down the road. It's not going to hang in a museum anywhere but I
think it can be touched up enough that I don't mind having my name
attached to it...
Posted by Brine Blank at 11:37 AM 4 comments: 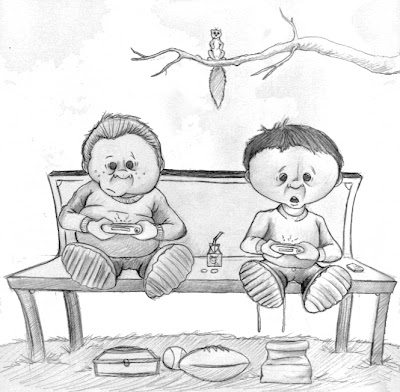 My dad is retired CIA so we never get to play that game...as soon as someone gets out 'I Spy' he hangs them out the driver's side window and starts interrogating them at 65 mph... 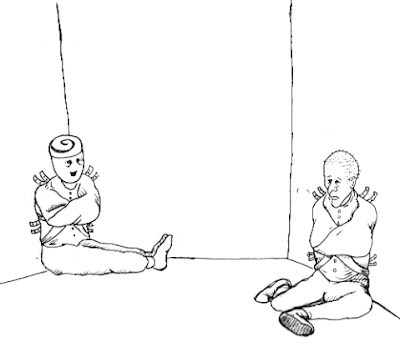 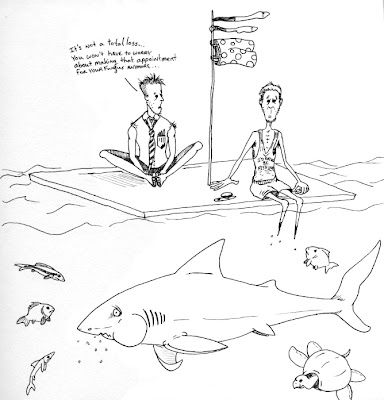 "It's not a total loss...you won't have to worry about making that appointment for your fungus anymore..."
Posted by Brine Blank at 8:15 PM 26 comments: 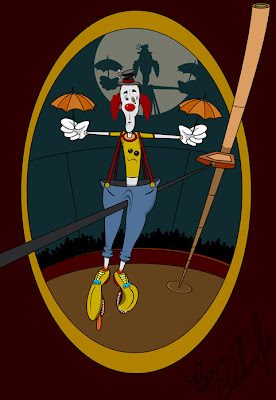 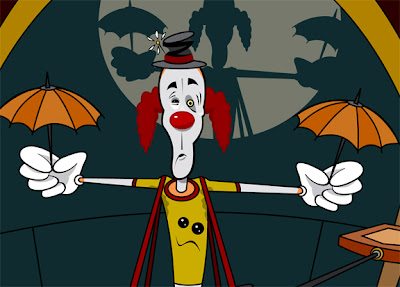 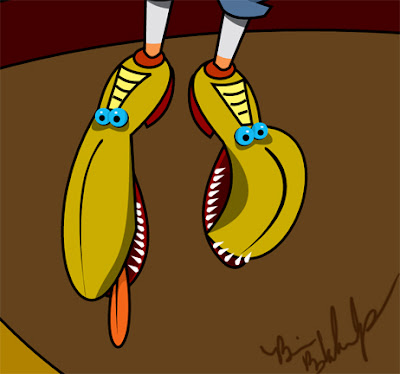 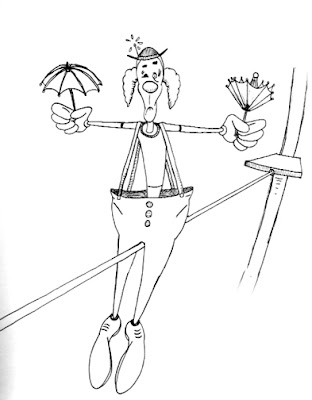 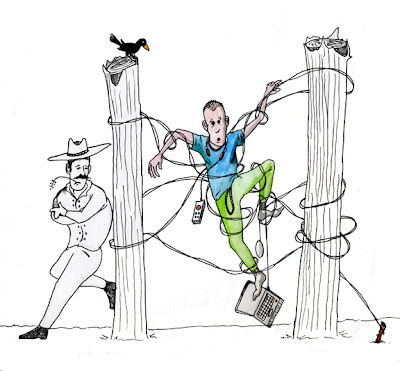 After moving from New York to Oregon, Todd asked one of the locals if they could help him get wired...he was more than happy to help out...
Posted by Brine Blank at 3:43 PM 13 comments: 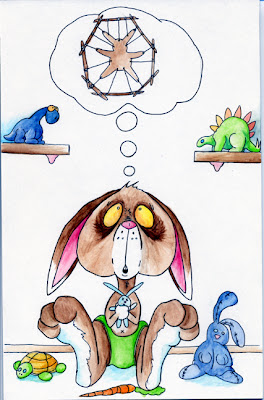 Mother rabbit quickly realized she needed to switch from 'tan your hide' to 'spank your britches' when trying to get Melville to clean his room...
Posted by Brine Blank at 11:03 PM 19 comments: 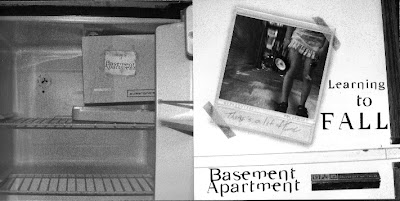 One of the best ways to approach any design problem
is to have a story. Why? Well, it helps with several potential design
problems and has the added benefit allowing you to 'talk' about your
work to a teach, professor, client or boss. The story you make up will
enable you to choose important visual elements as well as their
location. One needs to strike a balance of too much vs. too little
imagery. Too much can result in visual clutter and too little can lead
to 'dead spots' on the page (not to be confused with smartly used
negative space).

This was a college project that I enjoyed. Our instructor brought in a CD from one of his friend's bands called Basement Apartment. We listened to the music to get a taste for it (pretty mellow 'college' style music). The title of the single was
Learning to Fall. My story for this was two-fold. The first involved
the packaging...I played off of basement apartment by using a small
fridge to encase the cover. This took care of several areas because I
thought of theCD as parts of the appliance. The back showed the back
and allowed for nesting places for text. The front and inside (which is
the inside of the fridge) allowed for the logo to be placed as a
'product logo'...(if my memory serves correctly we had to design the
logo and I thought it turned out pretty well...but in my old age I
could just be making things up...) 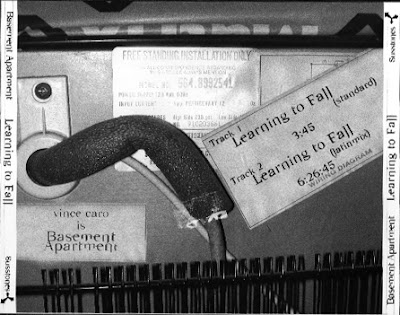 The second part of the story involves the song
title. When I thought of 'learning to fall' I figured there was a kind
of irony to learning to ride a bike without training wheels. Because
there involves a lot of falling (in my case and every other child I've
watched) as opposed to riding in the beginning, I figured that was the
actual objective...learning to take the fall with as little damage as
possible. So I played up the idea of a financially poor little girl in
a city trying to do just that. There is a sense of feeling grown up
when the feat is accomplished (both the safe falling as well as the
actual riding) so I found a dress that is starting to be outgrown and
made a Polaroid image of the girl, bandaged knee, holding a wrench and
training wheel...and of course fridges make great places to
tape 'current' historical events... so it all played together...

The inside booklet was of a brick street (that was composited
together) that had bits of foliage shooting up through the cracks...and
as much as it seems ladies like to grow up and move off to the city
(maybe a bit of a stereotype but it fits the story)...every little girl
in the city would like to have a lot of nice grass to play on...and it
sure makes falling a lot easier...grass between the toes...etc...so
there are pictures that were laid out by the child on the alley street
and somehow she ends up in her make-believe place...so the original
picture is now empty and we see her shoes and where she has taken off
her training wheels lying in the grass photos.

Pretty much any type of design can benefit from such planning with a story. Even if the designer is the only person that knows the story, it can lead to a
'deeper' and more visuallyinteresting piece. When a viewer has an emotional reaction to a work they tend to enjoy it more and remember it longer.
Posted by Brine Blank at 10:13 PM No comments: