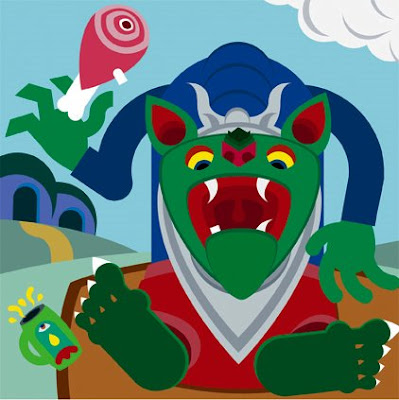 One thing I continually get inspired by is going to such sites as Illustration Friday or Drawer Geeks and seeing all of the great work of other artists. I believe one of the real challenges for an artist (and why these sites are often so great) is making sure not to lose the creative edge when doing traditional work. Yes art fields provide plenty of opportunity for creative problem solving and not being bored to death like more 'traditional' jobs...(I once worked at a window factory for a week...God bless the people that can work an assembly line without going and jumping off a cliff)....but our field comes with its own little special set of stresses. Deadlines, producing quality work, resubmits on last second changes, feast or famine on freelance, having your mind 'on' a whole lot as your problem solving (at 3am, 4am, 5am), driving while drawing when a great idea hits (just kidding...maybe)...etc, etc, etc.

So as I visit such sites I think it is great that these artists put time and effort into producing some of the GREAT work they do just because. Non-artists or people new to the field sometimes miss out on the fact that creative folks need creative outlets or they face burnout just like anyone else. PLUS it often results in learning something that can be used later!

I also often run across posts that were made for some sort of contest, again, just for a creative break. The Vormator challenge (the above picture is from this event) was a contest where you were give 8 simple vector shapes to rotate, combine, overlap, etc to produce anything you wanted. You just weren't allowed to to alter the initial shape or to destroy the shape in such a manner that you couldn't see the basis for the creation.

Another great idea that I've seen floating around is traveling sketchbooks. Artists get together and pass around a sketchbook, sometimes even across the globe to compile different drawing styles. Check out the following links for a really good creative break...

Vormator Challenge (Even though it is over you can still get the shapes and it is a great creative exercise).
Posted by Brine Blank at 9:00 AM 2 comments: 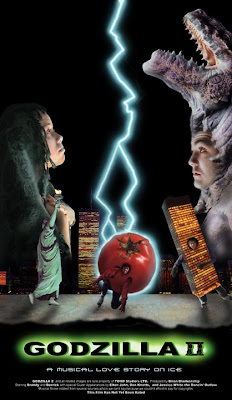 As I was prepping to consolidate files I ran across and old college project. We were to make a movie poster and a CD for the soundtrack. Since I had just written the 20 page paper on Godzilla and the American Version had recently been released to astounding reviews (sarcasm implied) AND we were greeted with Disney's sudden influx of 'every show they ever did on ice' franchise...I asked my prof if I could throw it all together. I came up with a back story...Godzilla moved to New York, just wanting to be left alone...got a job as a plumber, married, etc. etc. But as a misunderstood monster he was hated...The government tricked his wife into divulging his one weakness...an allergy to tomatoes...and the fight was on.

I intentionally went for a bit of the bad photoshop look while trying to not go too bad...wanting to pull in all the cheese of the Disney shows via costume design as well as the whole feel...Note the expressions on the building and tomato..Derek and Brandi from class were kind enough to pose...one thing you can't do with out...willing subjects!

The project was a lot of work due to posing as well as finding images I could scan and piece together that would fit the roughs. On a side note, this is where a lot of students in school fail to adapt, not finding adequate resources or realistically judging quality of items they have to see if they can be used to produce a polished product. I believe I spent about 16 hours in 3 different libraries finding pieces that would work...
Posted by Brine Blank at 10:47 AM No comments: 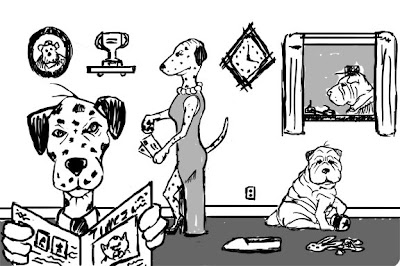 Bob couldn't help but notice there was something not quite right about his son...but he just couldn't put his finger on it...
Posted by Brine Blank at 10:46 AM 20 comments: 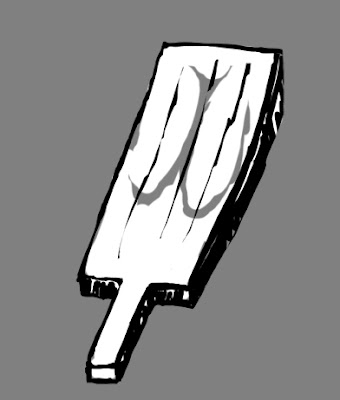 I have to laugh as I continue to hear people wonder what has happened to yet another generation of 'lost youth'...While I don't believe in beating children, I do know that the pendulum started swinging to the rough side of town when discipline started to disappear from homes and schools...You used to be motivated to do or not do a lot of things back in the day because you understood that action or inaction could have immediate negative consequences that you didn't look forward to...today we have 'time out'...and prisons busting at the seams, low graduations rates, high drop-out rates,people medicated to no end, unable to fill jobs and importing labor because we don't have people capable of doing the work, and a victim mentality where the system 'understands' if you go out and knock off a liquor store at 3 am or shoot three of your friends...because the notion of negative consequences to actions has been lost...and if you think a timeout is a 'punishment' that works, ask any 16 or 17 year old that gets kicked out of school for a timeout what a punishment it is and how they dread it...

While there are people that take it overboard (and shame on them) you'll never convince me that it doesn't have a strong influence on determining the outcome of individuals and nations.
Posted by Brine Blank at 1:11 PM 11 comments:

For at least a year I've threatened myself with doing a Godzilla pic. Who doesn't love a cheese-filled monster romp on a Saturday afternoon...well, lot's of people I suppose. In college, as they were redesigning Godzilla for the American version, I did a 20 page paper on Godzilla...special effects, symbolism, blah blah blah. It actually had some very interesting stuff...as a kid I wasn't that impressed with the original...but loved all the movies after where there were more monsters. As an adult I've flipped a bit. I'm okay with watching the one's after the original but they can be a bit painful at times. As I reflect on the original as an adult it was actually a pretty deep movie and makes the after movies look as silly as they actually are. I'm not going to get into the debate of the symbolism too much other than to say America did what it had to do at a very difficult time...and it sucks that innocent people were harmed or killed. Only crazy people enjoy war, but I understand that as the world is, sometimes that is the only option...as a veteran and knowing many others, war isn't fun or a treat. 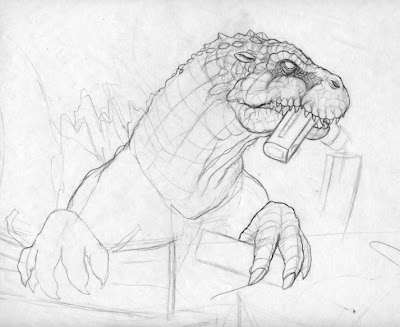 Regardless, the American version came out and I will agree with others...it was a great special effects romp, and I liked the monster design...but it wasn't Godzilla. They turned him into a bit of a chicken and a her no less...but it brought up an interesting idea...as people continue to rehash famous characters, how do you redesign something so recognizable without going overboard. Think of all of the redesigns of Frankenstein's monster. So I decided to give it a shot. I started with several doodles on scraps of what I wanted to try as well as figuring out what media I wanted to use. Since it had been a while since I was all digital on a big project I figured what the hey. So I decided on Freehand...so if the final version turns out nice I can make a big poster without worrying about pixel issues of Photoshop.

What you can't see in the sketch is the buildings or Japanese zero placement...those have been sketched out but as they cover part of the image I wanted to hold of until the big cheese was rendered. 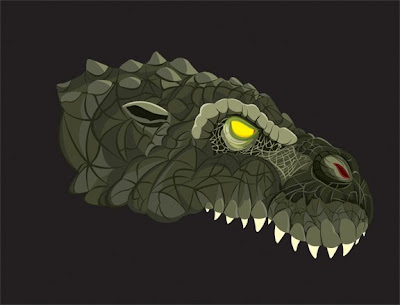 A sneak peek...more is finished but why give too much away at once...

The bad news about vector programs is if you don't have a lot of power, and you have a lot of points, everything can grind to a halt...luckily I have some really powerful computers at my disposal and here's to hoping that won't be an issue...considering how many points he is already taking up...and there is a LOT more to be done...I'm using plenty of layers in case there is an issue. Then I will be able to just save bits and pieces and import them into Photoshop to be pieced together when I determine a final printing size.
Posted by Brine Blank at 9:00 AM 7 comments: 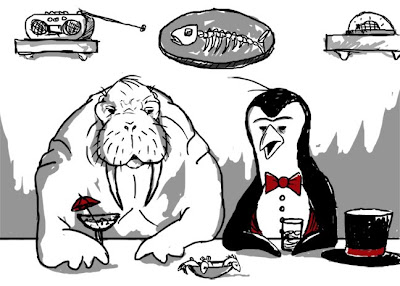 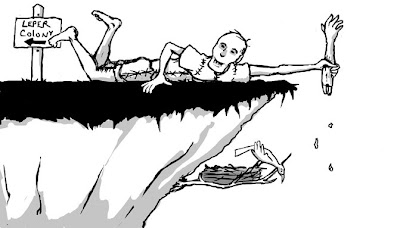